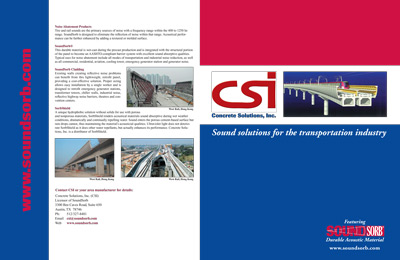 Gene Autry Way intersects Interstate 5 (I-5) in central Orange County moving hundreds of thousands of vehicles per day. In addition the project area falls within a two-mile radius of major attractions such as Disneyland and California Adventure Park, Angel Stadium, the Honda Center, the Anaheim Convention Center (the largest convention center on the West Coast), nearly 20 hotels of the Anaheim Resort Area, and the future Platinum Triangle Development.

Highway Soundwall is a Welcome Addition

The addition to this Nashville Soundsorb soundwall on this highway was music to residents' ears, now that less traffic noise is making its way into neighborhoods there. The popular Ashlar Stone texture provides a natural look that is both durable and acoustical.

Beautiful aesthetic imprints plus the benefit of SoundSorb's sound-absorbing technology have created happy residents. Some even had blankets covering their windows before the noise abatement project began, but now they're able to remove them as the traffic noise from an area highway is much more subdued thanks to SoundSorb.

Retrofit with Tiles Save Money

Existing reflective soundwalls on this highway project were retrofit with 2x2 SoundSorb tiles, saving the cost of removing those original walls and replacing them with complete soundwalls.

Two 20-foot-long sound-absorbing panels were stacked horizontally along I-55, and then stained with an aesthetically pleasing color that is harmonious with the surroundings.

This project features a CMU block reflective wall and a SoundSorb wall that mimics its look, as noise abatement properties were only needed in specific areas along Highway I-580. This creates a continuous look while providing sound mitigation where it was needed the most.

This soundwall shows how SoundSorb can be precast with the highway crash barrier and shipped as one unit to the installation site. This particular SoundSorb wall saves space by integrating the soundwall with the barrier. Colorado random drag texture that add visual interest as well as sound absorption properties.

A beautiful mixture of graphic artistry is displayed in detailed SoundSorb panels of multi-colored, stained "old brick," accented with white cement walls featuring native birds in their natural environment. The local historical society was also involved in the project, offering suggestions on the brick pattern and design, in order to mesh with community surroundings.

Beautiful landscaping accents a functional yet attractive soundwall that replicates a majestic mountain scene. The mountains were imprinted into the SoundSorb, which is perfect for replicating virtually any graphic design.